Posted by Forrest Boughner on February 14, 2017

Fresh snow salted the ground as I left the car parked on the shoulder of the Pioneer Scenic Byway and ducked into the easy-to-miss Pioneer National Recreation Trail. It was a chilly morning and lacing up my Gore-Tex running shoes outside the car froze my fingers. It felt good to be moving uphill, working hard to put distance between me and the frigid valley housing the Wise River.

I was in the West Pioneers, a part of the greater Pioneer Range, separated from the taller, more iconic East Pioneers by the river, the road, and eons of glaciation. In appearance the two ranges could not be more different considering they are thought to be one range by many. The East Pioneers reach higher and have been carved by ice and wind. Hundreds of lakes dot the valleys while only a few trees manage to hang on to the high ridges. The West Pioneers are lower, more rolling, and are heavily forested, which allowed me to attempt the 9490' Stine Mountain despite the snow. Lakes still dot the West Pioneers, and they are famously home to the rapidly declining Arctic grayling: a nearly genetically pure Arctic grayling population. It's like the Aryan brotherhood of the fish world in Montana. I have yet to be hooked by fishing, but a few locals say fishing for grayling in the Pioneers is a good time. I would find no lakes near my route, however, so the closest thing on my mind to fish was the Arctic graying of the sky.

The Pioneer National Recreation Trail, which promised to take me near the summit of Stine Mountain, is a 35 mile "loop" trail that links the ridges of the West Pioneers. Although it is designated as a loop, the completion of the loop requires 14 miles on paved roads, so it's really more of a point-to-point in a 'C' shape. I intended to do a bike shuttle and try to run the 35 mile trail, with a side-trip to visit the high-point, but the early snow canceled that plan. Most of the trail follows old road beds left over from mining and logging in the area so the grade of the trail is not too steep. As I put more distance between myself and the car, however, I found the "old-roadbed equals gradual-trail" theory to be hogwash.

I started from the North end of the C, which put me six miles from the summit. To get there, however, I needed to climb from 6,000' to 9,000' and almost all of that is in the first few miles. Steep pitch after steep pitch kept me in a constant state of rhythm finding, made all the more difficult by the snow covering the loose rocks. I brought Zeno with me and he seemed to be loving the skiff of snow, but my big feet are no match for his nimble paws when it comes to obstacle avoidance.

We climbed through heavily forested areas, clearly on a mountain shoulder, and only caught occasional views of the valley below and Stine Mountain at the head of the drainage. Eventually, though, we crested onto the ridgeline proper and immediately were able to pick up the pace despite the deepening snow.

A few minutes after it leveled we stumbled across a mess of tracks in the fresh snow that looked only minutes old. At first the tracks appeared to be a black bear with a cub, but upon closer examination the feet looked too narrow to be a bear. Unnerved by the freshness of the prints, we did not hang around too long following the tracks and it was only later that I realized I should have snapped a picture so hopefully a friend could identify them as wolverine prints.

The snow continued to deepen and I slowed to a stumbling walk. Since the trail followed the remnants of an old road bed it was not too difficult to follow. Eventually the trail began to fall off the North side of the ridge so we cut uphill to stay on the ridgeline that would lead to the summit.

Another set of fresh tracks, definitely black bear, greeted us on the ridge and paralleled our route for a half mile before turning off. A few more sets of tracks came up out of the basin to our East and continued to the West. We were clearly in a popular bear corridor.

A quarter mile from the true summit we crested a little knob. From there it was a flat walk through a dense forest of Christmas tree-height conifers before a quick scamper up a boulder field to the rounded summit. From the summit the East Pioneers looked incredibly close (turns out they are close) and we were able to sit and watch a storm pummel the side of the higher mountains. We didn't sit long,  maybe 10 minutes, because that same storm was whipping wind gusts around the summit of Stine Mountain. Stuffing a Snickers into my jacket pocket to thaw for the descent, we quickly returned to the shelter of the trees.

Immediately after entering the trees I noticed a new set of bear tracks. A set of prints I failed to notice on the way up, a mere 15 minutes earlier, mostly because they weren't there 15 minutes earlier. As I saw more and more tracks on top of my own footprints it dawned on me that these were fresh, just out of the oven fresh. Somewhere within a few yards of me was a bear that I could not see because of the dense, low-level trees. I removed the safety on my bear spray, picked up the pace, and sang louder than I had all day. The bear's tracks were on top of my own for the next quarter mile. It had climbed up out of same basin we did, then presumably came across the delicious smell of Snickers and interrupted his morning sojourn to stalk us for a bit. I can only imagine that my awful singing spooked him off our trail moments before we dropped back into the trees.

Creatures closely following my tracks probably happens often. I once espied a deer following me for nearly a mile in the Tetons. Usually I won't notice, though, because typically there is not fresh snow and I try to avoid out-and-back adventures in favor of loops. Stumbling across recent evidence of my stalker on his (or her) home turf pushed the Snickers from my mind for the next hour while I put some serious distance between us. As far as I could tell Zeno was oblivious the the whole thing.

I am still fascinated by the juxtaposition of the East and West Pioneers. I am excited to explore the East Pioneers this next summer, and head back to the West Pioneers to complete the full Pioneer National Recreation Trail when it is snow-free. That way I won't see what's stalking me. 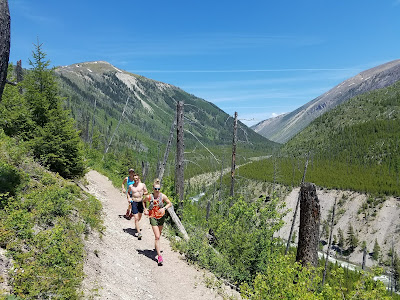 North Fork of the Blackfoot Falls

Cruising down the North Fork of the Blackfoot River The Bob Marshall Wilderness Complex is overwhelmingly huge. I often find myself pouring over maps plotting out interesting loops for a run, only to realize this "short" loop is 35 miles. I often find myself paralyzed by indecision on adventure locations here. Fortunately there is a massive waterfall on the North Fork of the Blackfoot that roars through a narrow defile in the canyon. Well, it roars in late spring, which is when I suggest going. The Falls are a great destination spot for a weekend long run, or weekend backpacking ramble (although it's better to camp near the guard station). I typically like to avoid out-and-backs, but this route is worth it. Beginning from the North Fork of the Blackfoot Trailhead, follow the wide, well-traveled horse trail to North out of the parking lot. Like many of the trailheads on the South side of the Bob Marshall Wilderness this is a major access point for outfitters. Compa 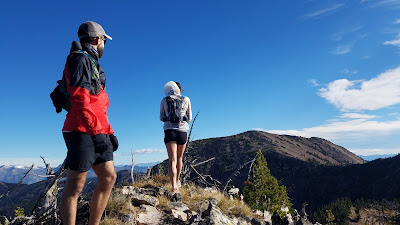 Looking at McLeod Hiding behind Stuart Peak and Point 6 when looking North from Missoula is the 8,620' McLeod Peak. The 'Snake, as the National Recreation Area/Wilderness/Mountain Range is affectionately known, serves as a wild backyard to Missoula residents. Bikers, hikers, runners, backpackers and hunters can be found all over, and during the winter months skiers come out to play. Much of the Rattlesnake consists of lower, forested hills and rolling mountains, but as one gets farther North the terrain gets more rugged. McLeod is a rocky, alpine mountain, which contradicts the experience of most Rattlesnake users. I met Nate Bender and Kristina Pattison at the main Rattlesnake Trailhead a mere week after the Rut Mountain Runs. We were all still tired from the race, but decided to try a long traverse of the entire Rattlesnake ridgeline, from McLeod down to Stuart Peak. Kristina would join us for first portion, up Finley Creek, climb McLeod, then back down Finley Creek whe 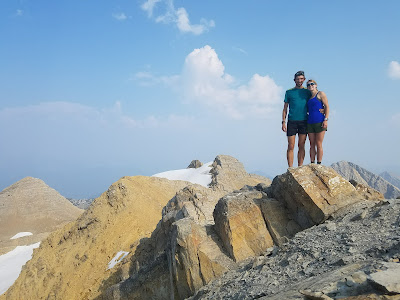 On the top of Great Northern Mountain When I first moved to Montana I couldn't figure out why in the Flathead Valley just outside Glacier National Park, it seemed that every third business includes "Great Northern" in its moniker. It turns out there is a mountain, a pretty big mountain, west of the Kalispell-Whitefish-Columbia Falls micro-megalopolis called Great Northern. It's the highest point in the Flathead Range, and the highest in the Bob Marshall Wilderness (not to be confused with the Bob Marshall Wilderness Complex , that highest point is Red Mountain) at 8,705'. It is difficult to see Great Northern from any road due to other mountains and trees obscuring its summit, but it is worth the trip to catch a glimpse. Great Northern, the mountain, does not pull its name from its size, its prominence, or its northerly latitude. Rather it references the northernmost transcontinental railroad line, the Great Northern, that runs a few miles north of its base